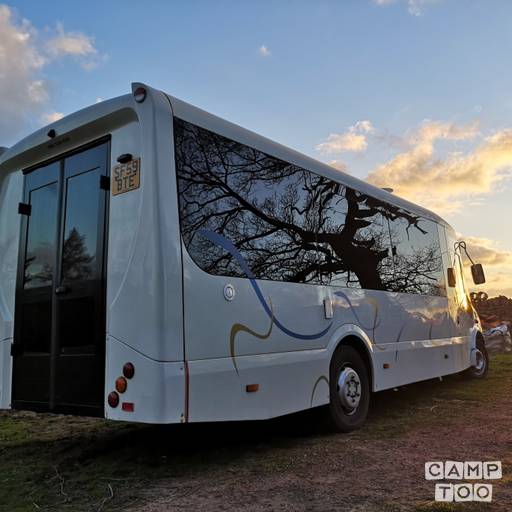 Priscilla is our fabulous camper. She was a bus in a previous life, which means that she has a unique character, lots of space and is very comfortable. She is quite a head turner , and gets lots of attention wherever she goes! She is registered with DVLA as a campervan, which means that she incurs the lower level of fees for ferries etc. Priscilla is the perfect vehicle - whether you’re going to a festival, to a campsite, or wanting to spend some time totally off grid. She is fully insulated, has a recently serviced 4kw diesel heater and 2 large roof fans - so is equally comfortable in hot or cold weather. Priscilla has large fixed solar panels on the roof , which give ample power for a separate electric coolbox, lights , TV, radio and roof fans when off grid. She also has a WIFI antenna and hub (SIM card not supplied - you will need to bring your own) in order to enhance poor internet signal.  She has a fixed double bed at the rear, which is 1.3m w x 1.9m l. The table area and bench seat fold down into 2 further beds, measuring 90cm w X 1.78 l and 78cm w X 1.8m l respectively.  There is a full kitchen with gas oven, grill and 4 burners, a fridge with small freezer compartment, and a microwave. There is ample crockery, cutlery, pots and pans for your holiday. There's hot and cold running water. The main fridge and microwave only work when on electric hookup, but we can provide a large electric coolbox if you’re going to be wild camping. Priscilla is fitted with a carbon monoxide alarm, smoke alarm , fire extinguisher , fire blanket and safety hammer to ensure you are kept safe on your travels. There is a 12v television with integrated DVD player. The bathroom has a flushing toilet, sink and shower.  There is a large boot /storage area, where folding chairs, table and BBQ are kept. There's plenty of space for you to store things there too! The addition of the shower and off grid water heating system are new this year. With previous hirers, Priscilla has been a frequent visitor to Scotland, and has done the NC500 more than once. With us, she has been to the Isle of Lewis, to London, and a 3 week trip to the South of France - as well as more local pub carpark stopovers . She has seen many beach campfires, campsite stays when visiting London, and been to Glastonbury amongst many other festivals.

We had a fabulous week touring Scotland in Priscilla Queen of Northumberland. She never missed a beat. Really easy to drive. Janet was very helpful both before and throughout our journey. Very very pleased. Would definitely recomend Priscilla.

I rented Priscilla to use as a base for a short walking holiday with my two adult sons. We were very happy with the van and Janet was a friendly, helpful and flexible owner to rent from. The van is very well equipped - good stock of equipment and all in excellent condition. We cooked proper meals every night without difficulty. Sleeping was as comfortable as a van can be expected to be. We did not drive very far from the pick up and stayed put: Priscilla is large and a long journey on small roads might be a bit slow, but she is easy to drive and you could tour fairly slowly I think. (I've given three stars for engine and general state as five says "like new": it's not a new vehicle but is perfectly fine in these respects)

Janet was very helpful and always answered messages quickly. Priscilla was full of character and sparked a lot of interest from people who saw her, as she is quite old she does rattle and bounce around alot when on the road so make sure everything is secured onboard, she could also have been a little cleaner to our standards, smelled a little foisty. However we did enjoyed the trip very much.